Stout's Island Lodge is closed for the season and will reopen on Memorial Day Weekend.

Step Back in Time

Stout’s Island Lodge has been captivating visitors for nearly 150 years. By landing on these historic shores, you’re joining a long list of adventure-seekers (and unapologetic leisure-seekers), prominent industry tycoons, lovebirds, and families who find what they’re looking for here. Grab a S’more or a glass of scotch and settle in to learn more about those who came before you.

The Origins of Stout’s Island Lodge

In the mid-1870s, lumber baron John Holly Knapp was the first to purchase a homestead claim on the island. Not to be outdone, mill foreman and land agent Mr. J. Hornsby Butcher soon followed. Mr. Butcher and his English sweetheart, Sarah A. Hopwood, eventually built the first cabin on the island.

In 1887, Frank D. Stout and Thomas Wilson, Jr., purchased the island. They set out constructing a large log building on the island to allow them to bring their friends over for hunting and fishing. (If you or your spouse thinks a “man cave” is too much of an indulgence, at least there isn’t an entire island and log mansion involved.)

Mr. Stout was already a prominent lumber baron who, after inheriting part of his father’s fortune in 1900, became one of the wealthiest men in the country. Mr. Wilson sold his stake in the island to Mr. Stout n 1903, and with that $14,00 purchase, Mr. Stout assumed sole ownership of the 18-acre island.

Mr. Stout’s hunting lodge indulgences lasted only until the women in his family learned of the island’s striking beauty. They, understandably, wanted to join in the fun, and the island soon morphed into a year-round family retreat.

The original main lodge was built in 1903 and modeled after the famous Adirondack camps. Mr. Stout spared no expense, bringing in four-inch-thick plank floors and carved beams imported from the Black Forest in Germany. A special railway station was built in the Narrows for Mr. Stout and his family to use. He moved his family and servants north from Chicago for the summer months. 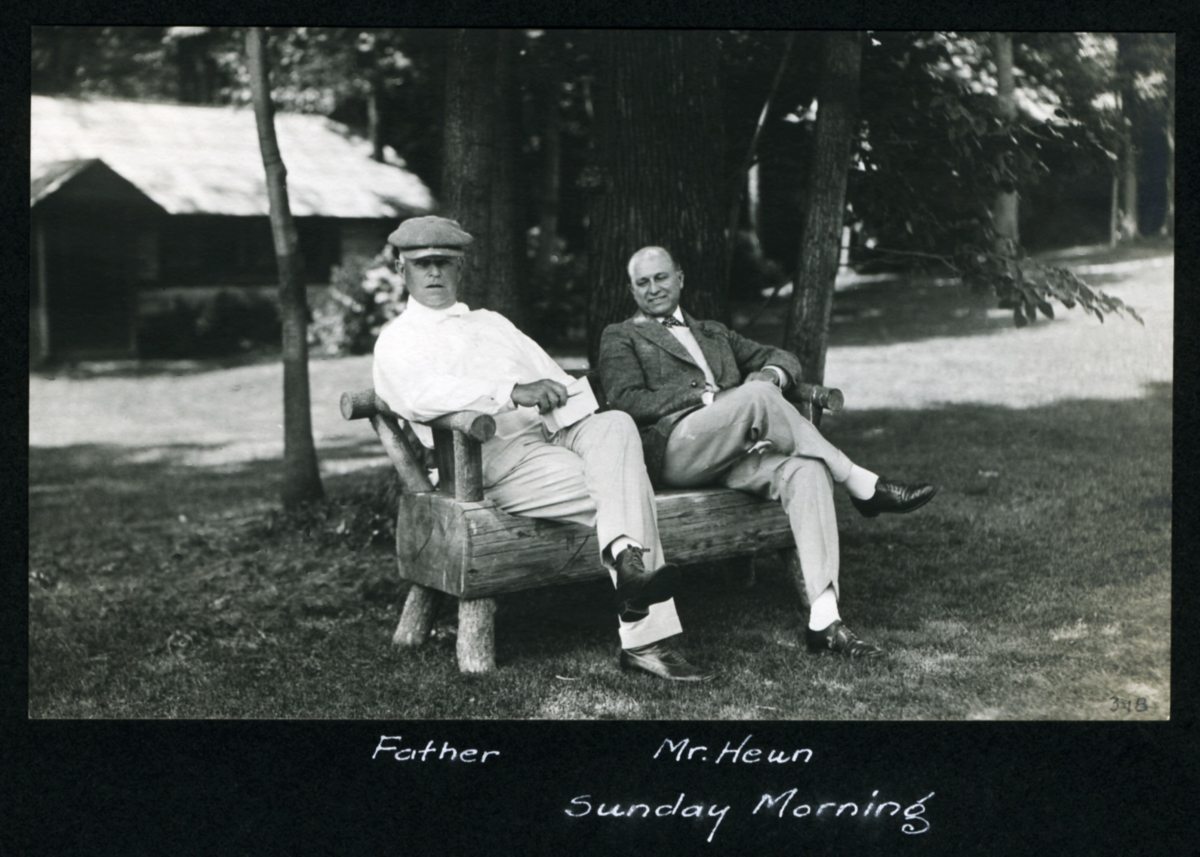 The main lodge you see today was built in 1912, using a specially ordered trainload of what were described as “the best cedar logs grown in Idaho.” Other beams and paneling came from two carloads of redwood timbers from California. It was long thought the original lodge was burned down due to a bug infestation. This is not true; the new lodge was built to include modern luxuries like plumbing and electricity.

The dining room fireplace features stone imported from Italy. The fireplace in the living room is built of pink quarry rock from the Hardscrabble Hills.

The main island is connected to the east island by a steel bridge that was gifted by none other than Andrew Carnegie himself. 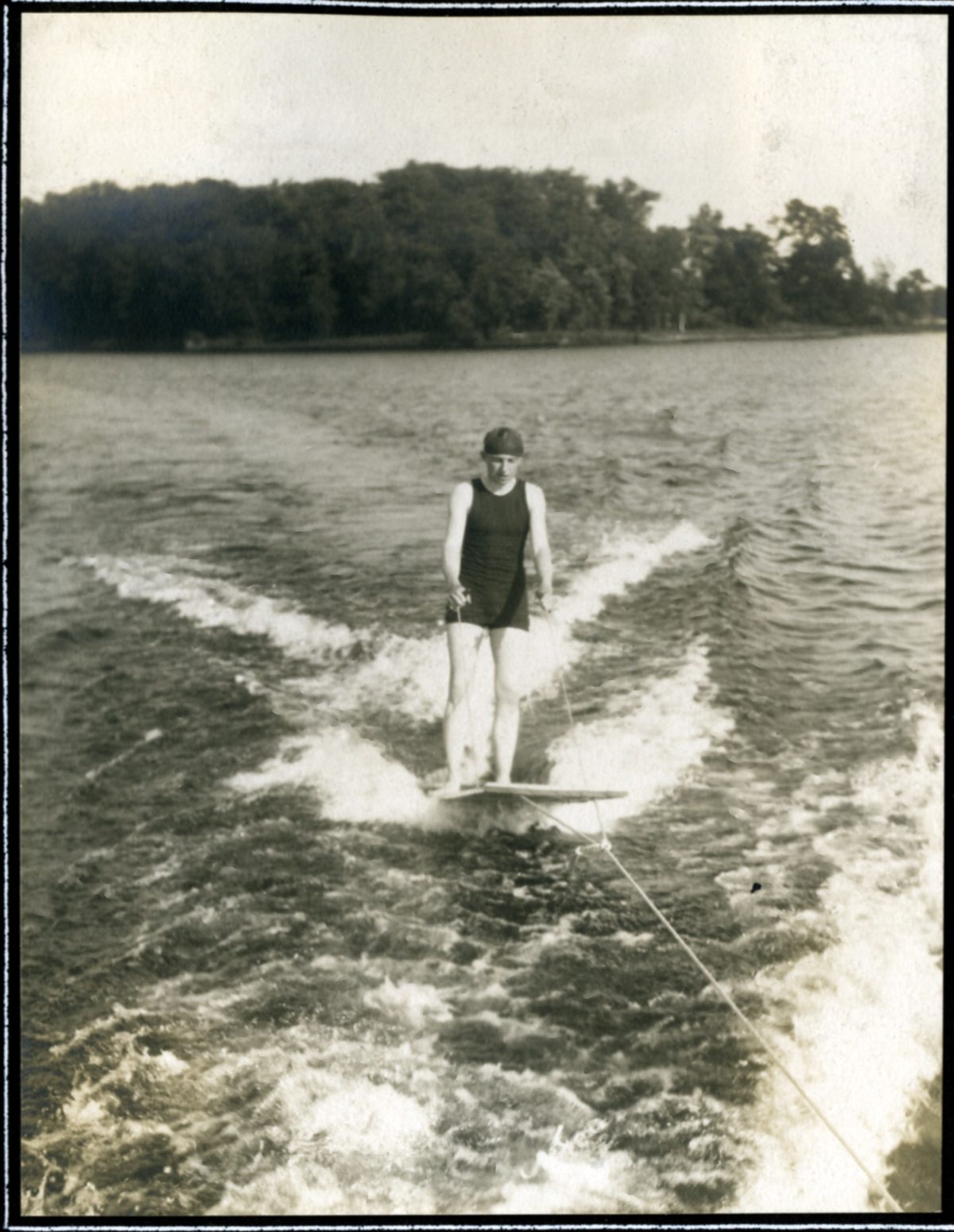 The main lodge was a family home in every way. The dining room we use today as a restaurant dining room was the Stout family’s dining room. The Great Room was their living room. And “Mrs. Stout’s Room” was their master bedroom. The main lodge also includes rooms that Mr. Stout built specifically for his children and guests, all connected by screened passageways and doors. He built Harry and Allison’s cabins for his sons.

In spite of the warm welcome inscribed in the foyer “All that’s mine is yours, my friend,” Mr. Stout was incredibly territorial about the island. He actively scouted for trespassers, going so far as to circle rowboats with his motorboat in an attempt to capsize them. We’re a lot friendlier now.

Mr. Stout adored the Island of Happy Days. When he was dying in California in 1927, he to reach his island so he could see it one last time. Unfortunately, he only made it as far as Rice Lake before passing away. His wife and family continued to enjoy the island until Mrs. Stout’s death in 1949, when it was sold to a succession of owners.

At one point, Bing Crosby was part owner via a real estate investment company. The current owners purchased the island in the mid-1990s, built five additional cabins on it, and established the resort operation you enjoy today. We don’t know what Mr. Stout would think about our policy of welcoming all who come here (and never intentionally capsizing anyone), but we know he would appreciate the love that we — and our visitors — have for this breathtakingly beautiful retreat. It is, as he knew it to be, the Island of Happy Days. 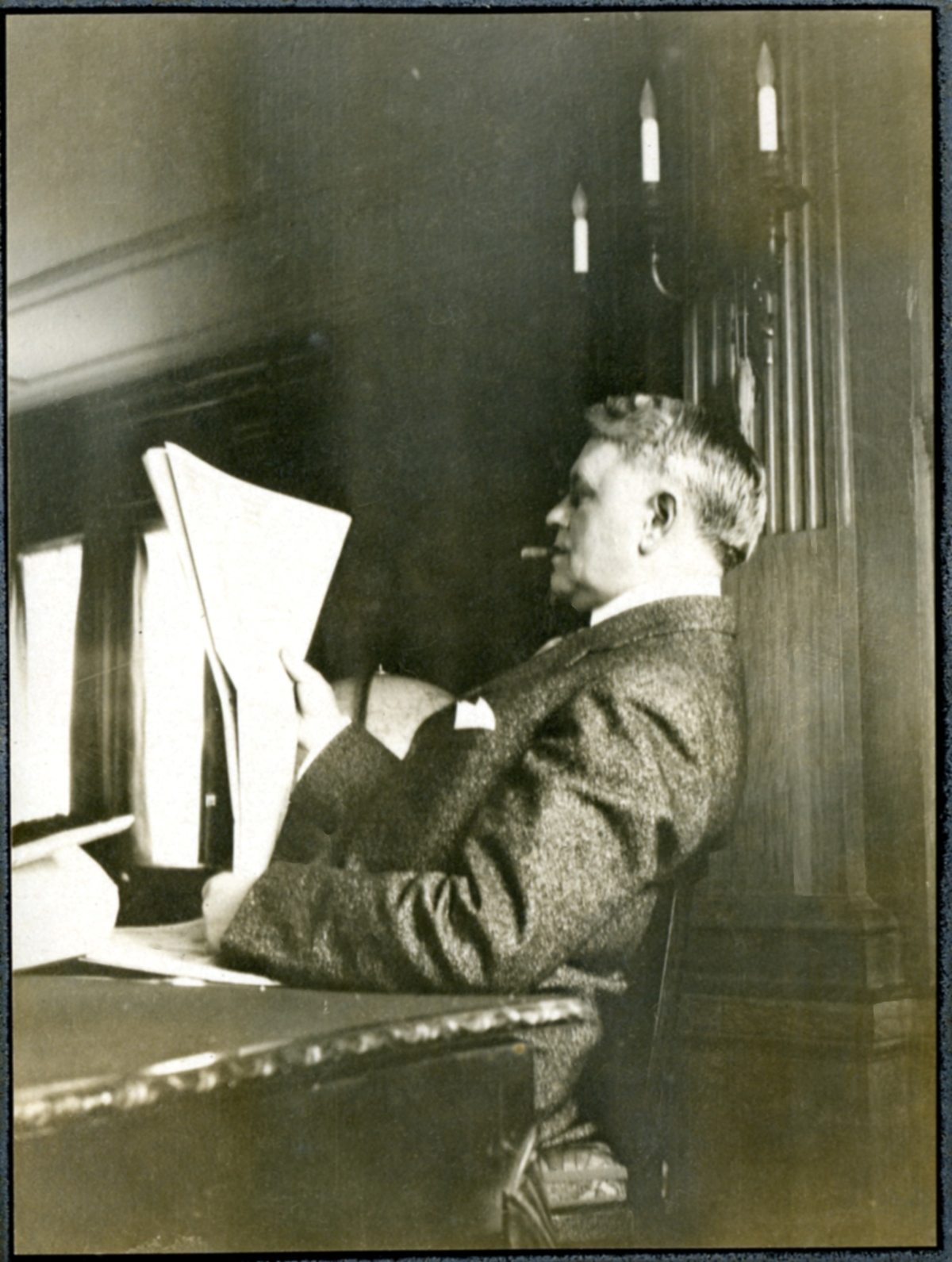 The Man Behind the Island: Frank Deming Stout

Frank Stout lived in Chicago most of his working life with a permanent home at 3150 Lakeshore Drive. He was considered one of the city’s ten wealthiest men; a financier and banker who had served as chief executive of the C. & O. Lumber Company; director of the Illinois Merchants’ Trust Company;  and president of the Missouri Southern Railroad.

He was also director of the Chicago and Eastern Illinois Railroad; a director in the Texas Corporation, an oil firm; and held directories in the Drake and Blackstone hotels in Chicago and three lumber companies on the Pacific coast. The basis of his wealth came from the family’s timber holding in northwestern Wisconsin which dated from the 1850’s.

Mr. Stout retained considerable property around Red Cedar Lake, including what became his summer home on the Island; two well-stocked dairy farms named Lone Pine and Cedar Lake, where he kept his prize imported Guernsey cattle. Over the years Stout also purchased acreage on the mainland and built the Tagalong Golf Course, modeled after the famous St. Andrews course in Scotland. The Tagalong Golf Resort is only a ten minute ferry ride across Red Cedar Lake. Stout’s Island Lodge guests are welcome to play today’s course.